Skip to main content
Home » Articles by Urban Opticians » Computer vision syndrome: How it can impact productivity and performance at workplace or while working from home. By Dr. M Jafferji 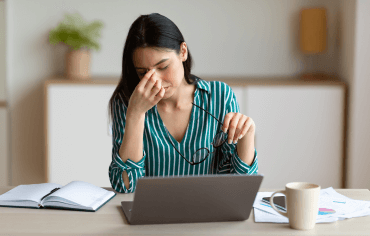 It is hardly a debate that computer technology is the backbone of most businesses, and the corresponding use of desktops and laptops is on an upward trend.  As a society we are also becoming increasingly connected to technology and are surrounded by the widespread use of internet-based applications and programs in our working and personal lives.

Employees who are required to use computers and/or digital devices on a full-time basis still need to be productive.  Unfortunately, there are consequences to the heavy use of computers and digital devices. This is especially true during the current pandemic when many employees are now working from home and as a result are in front of their screens a lot more.  Meetings are now conducted virtually using video-conferencing software instead of face-to-face, and many more tasks are being adapted so they can be done virtually, i.e., using a computer.

The consequences of heightened screen usage are more pronounced than ever before.  One of these consequences is to our eye health and our musculoskeletal system due to repetitive eye and muscle strain.  Even if the employees in your particular workplace appear unaffected now, eventually the majority of people with prolonged, daily exposure to computer screens will deal with symptoms, some of which can become severe, unless properly managed at the outset.  The severity of the symptoms experienced will depend on a person’s visual perception, the number of hours they spend in front of screens, the workplace set-up which includes ergonomics, lighting and the environment.

Many employers neglect to realize the long-term effects of prolonged screen use on their employees’ visual and musculoskeletal health and the resulting impact on their employees’ productivity and performance.  In other words, heavy screen usage directly and negatively correlates to productivity and the bottom line.  Many employers simply do not realize that prolonged screen use is not just a health issue but a performance one. The good news is that there are simple, direct ways to manage it.

What is Computer Vision Syndrome(CVS)?

CVS is a term associated with the symptoms or consequences that individuals suffer from due to prolonged digital screen use and the repetitive stress it can cause on the visual and musculoskeletal systems. It is essentially a form of a repetitive stress disorder. Modification in the ergonomics of the working environment, employee education and proper eye care are crucial in managing CVS.

According to the American Optometric Association (AOA), the most frequent health complaints among computer users are vision-related. Studies indicate that 50 to 90 percent of computer users suffer from some form of visual symptoms related to CVS.  These symptoms include eye strain, headaches, dry eyes, eye irritation, blurred vision and double vision.

With more people using computers for long periods of time, CVS is becoming a major public health issue. The AOA reports that a survey of optometrists found that approximately 10 million eye exams are performed annually in the United States due to vision problems related to computer use.

A study conducted by the University of Alabama at Birmingham (UAB) School of Optometry examined the relationship between the vision of computer users and their productivity in the workplace.  Three important findings from the study underscore this relationship:

As eye care professionals we understand that businesses rely on employees to be productive and also perform optimally and a 20% drop as stipulated in the study is unacceptable for our standards.  So, we decided to embark on this mission to alleviate CVS and help individuals suffering from it. The problem is most people that suffer from CVS already know that it is the repetitive stress of working on computers for long hours but rarely do anything about it.  This isn’t because they don’t necessarily know what to do but need guidance on how to do it effectively. That is where we come in.

We first do a thorough oculo-visual assessment and determine if prescription eyeglasses will be necessary or not. Based on the findings from the exam we counsel them on the health aspect and how it pertains to their symptoms.  We help them with their optical visual needs, and provide them with our unique, best-in-class, Self-Instructional Module to prevent and cope with symptoms of CVS.  We also conduct routine follow ups with them to re-assess their symptoms, thereafter.

In the Self-Instructional Module, we provide employees with an in-office and at-home protocol to follow. The protocol runs on principles of habit formation and behavioural changes adapted from the teachings of James Clear in his highly acclaimed book, Atomic Habits: Tiny Changes, Remarkable Results and the Pomodoro timed application techniques. Ultimately, our goal is to build awareness and educate chronic computer users so they can become more productive at work by reducing the symptoms of CVS caused by this repetitive stress disorder.